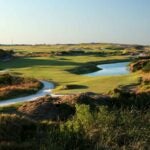 Streamsong’s latest design, by Bill Coore and Ben Crenshaw, will offer 6-, 12- and 18-hole loops, but not this traditional golf element.

If you’re a certain type of golf nut, you know about new courses long before they open.

No detail is too small to pique your interest, especially with a big-name project.

With that in mind, we give you the latest news from Streamsong Golf Resort.

Already home to three acclaimed 18-hole courses, the Florida destination has a fourth course in the works. We’ve known that course was coming, and that it would be shorter than its three siblings. Now we also know its name and how it will be routed.

Designed by Bill Coore and Ben Crenshaw, the course will be called The Chain (more on the name later), and it will sit on a roughly 100-acre site, an easy walk from the resort’s main lodge. The course itself will be a friendly walk as well, maxing out at 3,000 yards, with 18 holes that range in length from 90 to nearly 300 yards, and — this is where the concept gets particularly cool — the options of 6- and 12-hole loops as well.

The 6-hole loop will spill through a grove of native oaks, and its longest hole will be roughly 145 yards. It is meant to be a fit for players of all levels. The 12-hole loop will be more demanding, stretched across old mining cuts and along the banks of a creek. Those 12 holes will range from 125 to 300 yards, and they will be ripe with risks and rewards.

What The Chain will not have is any mention of score relative to par. Not on any holes. And not on the scorecard. Nor will there be traditional tee markers. You’ll be able to pick where you peg it.

The point is to provide the kind of flexibility and fun that the industry has increasingly embraced. The Chain should pose a challenge if that’s what you’re after. But it will also offer a quicker option than Streamsong’s existing Red, Blue and Black Courses. Incorporated, too, into The Chain will be a two-acre putting course called The Bucket, a rollicking venue roughly twice the size of the existing Gauntlet putting course at Streamsong Black.

As for those names — The Chain and The Bucket. They derive from mining terms, which make sense, as the courses at Streamsong sprawl across the remains of dormant phosphate mine, where decades-long operations left behind a heaving landscape, rich in character for golf.

While working on its fourth course, Streamsong has also been working on a logo for The Chain. Special edition merchandise with that logo will be available online and at the resort starting in August. If you’re a certain type of golf nut, you’ll be into that, too. An opening date for The Chain has not yet been set.

A golf, food and travel writer, Josh Sens has been a GOLF Magazine contributor since 2004 and now contributes across all of GOLF’s platforms. His work has been anthologized in The Best American Sportswriting. He is also the co-author, with Sammy Hagar, of Are We Having Any Fun Yet: the Cooking and Partying Handbook.