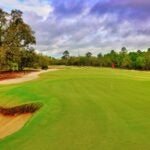 What exactly makes a golf course great? Scores of weighty volumes and a zillion breezy blog posts have addressed this question, many of them settling on this answer: Great courses marry artistry and scenery with shot-making variety in a manner that blends seamlessly with their surroundings. That’s for starters. The consensus holds that great courses also make you think. They engage and entertain. Offer up any of these observations with your pals over a post-round drink and it’s unlikely anyone will argue. But they may come back with “How about some examples?”

To help you strike an authoritative stance without coming off as a windbag, we asked a quartet of premier architects — Tom Doak, Bill Coore, David McLay Kidd and Jim Wagner — to discuss their own work as illustrations of how their design ideas play out in the field.

Whenever someone praises a course that Jim Wagner and his partner Gil Hanse designed for “being right out there in front of you,” Wagner knows that he’s supposed to be flattered. But that’s not how he takes it. Obviousness is never his intent.

“If you figure everything out the first time around, then we haven’t done our job,” he says.

The goal is to put you through a range of experiences and emotions: elation, deflation, clarity, frustration. The “A” hole at Wagner and Hanse’s Ohoopee Match Club in Georgia does the trick. Part of a four-hole “whiskey” routing that complements Ohoopee’s main 18, it stretches a shade under 500 yards. (Par isn’t listed on the scorecard, as every hole at Ohoopee is set up for match play.) Finding the fairway off the tee is not the issue. The architects made that step relatively easy because that’s where the real fun begins.

The green is something of a sunken thumbprint, set at an angle to the fairway. Players taking aim in two are asked to carry a swatch of sandy waste and a small, volcano-shaped green-side bunker. Everybody else is vying for position, plotting a path to a punchbowl putting surface that can either receive or repel.

On a poorly conceived hole, the sole purpose of your second shot is to advance the ball. A great design allows for so much more. Aerial assaults. Ground-game entertainment. Hazards, heroics, pitfalls, possibilities. Consider it a puzzle with no fixed solution.

“Ideally,” Wagner says, “it should take a lifetime to figure it out.”

A golf, food and travel writer, Josh Sens has been a GOLF Magazine contributor since 2004 and now contributes across all of GOLF’s platforms. His work has been anthologized in The Best American Sportswriting. He is also the co-author, with Sammy Hagar, of Are We Having Any Fun Yet: the Cooking and Partying Handbook.