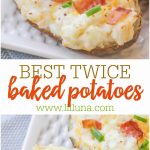 Easy Twice Baked Potatoes are loaded with sour cream, cheese, bacon, and seasonings for the perfect savory side or main dish!

Twice Baked Potatoes can easily star as the main dish with a few sides such as Cobb Salad and Baked Beans, or it can be served as a side for a main dish like Slow Cooker Chili or Grilled Steak.

Have you tried making Twice Baked Potatoes before?

If not, you’ve been missing out. These savory potatoes are packed with sour cream, bacon, and cheese for the ultimate side dish!

What’s a Twice Baked Potato? Essentially, they are baked in the oven like a normal baked potato and cooled. The insides are spooned out and mixed with cheese, sour cream, bacon, and all kinds of other delicious stuff. The mash is put back into the skins and baked a second time.

Sounds amazing, right?? Believe me, it is!

How to make Twice Baked Potatoes

These potatoes do require more time than regular baked potatoes, but the same amount of effort. The most time-consuming part is baking them in the oven!

BAKE ONCE. Start by piercing the potatoes (we recommend using Russet Potatoes) with a fork several times, and baking them for an hour at 400°F. Once they come out of the oven, let them cool for 10-15 minutes.

FILLING. Cut potatoes in half, spoon out most of the potato insides, and place them in a bowl. Brush the oil mixture over the tops and bottoms of each potato skin.

Mix about 1 cup of cheese, sour cream, bacon pieces, salt, and pepper with the insides of the potatoes. Mix well. NOTE: To keep your potatoes from getting gummy: keep the potatoes warm and do not over-mix.

BAKE TWICE. Spoon the potato mixture back into the skins. Sprinkle potatoes with cheddar cheese and bake for 16-18 more minutes.

Grilling Twice Baked Potatoes. Wrap the potatoes in foil and place them on the upper grill gate.

Piercing the potato with a fork is an important step, it allows the built-up steam to escape and prevents the potato from exploding.

How to scoop the potato flesh. Use a teaspoon to scoop out the inside of the cooked potato. I like to start in the center and work outward from there.

Do not scrape the inside clean. Leave a thin layer of potato so that the skin keeps its shape and doesn’t crack and break apart.

We always run out of these potatoes at functions since most people end up grabbing two. Just note the recipe should make fewer than double the amount of potatoes cooked because they are filled with more filling than what you get from one-half potato.

Here are some numbers to help with that:

Once you have your best Twice Baked Potatoes done, top them off with all your favorite toppings! Sour cream, cheese, and bacon are already mixed into the potatoes, but you are welcome to add more. Other toppings include:

They really are such a great side dish and perfect for any potato lover.

Make ahead of time. Follow the recipe as written, except for baking a second time. Place the filled potatoes in a covered container and store them in the fridge for 1-2 days.

When you are ready to use, place the potatoes on a baking sheet. Bake at 400°F for 15-20 min or until hot and the cheese is bubbly.

REHEAT. Bake at 400°F for 20-25  minutes or until hot and the cheese is bubbly. Microwave a thawed potato. The result may be a little more “mushy” than heating in the oven, but still delicious.

FREEZE. After making the recipe allow the potatoes to cool. Wrap individually using plastic cling wrap and place in a freezer bag or other airtight container. Freeze for up to 3 months.

And for the casserole version of this recipe, check out: Twice Baked Potato Casserole