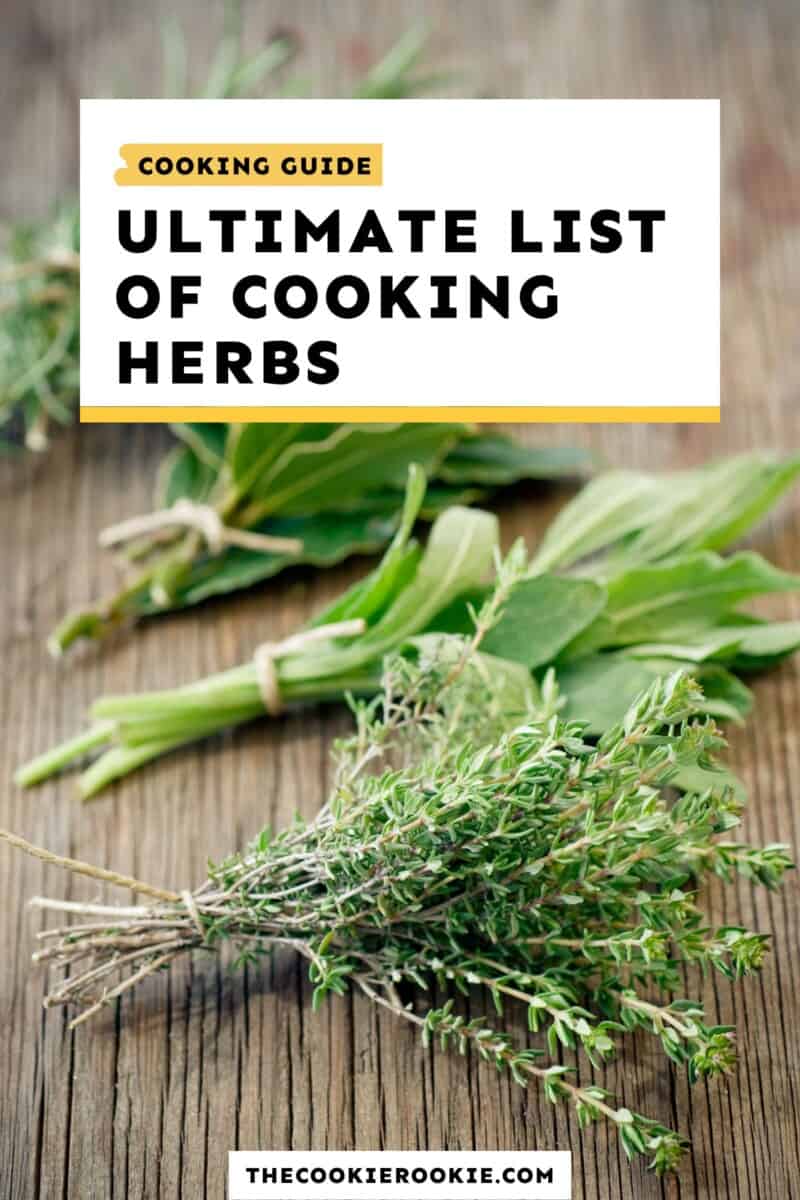 This is the only list of herbs you’ll need! Learn about the most common cooking herbs to keep in your kitchen, what they taste like, and when to use them in your recipes.

Cooking herbs are an important thing to use in the kitchen. Along with spices, they do so much work to make your recipes taste great. No dish is complete without a little extra flavor!

This essential list of herbs includes all the best ones you need to know. These are the most common ones, and you’ll see them come up in recipes again and again.

I’m explaining each one, what it tastes like, where it comes from, fresh vs dried herbs, and how to use it. So consider this your ultimate guide to herbs!

What is an herb?

Herbs are different parts of a plant (usually the leaves or flowering parts) that are used to add flavor to dishes while cooking. They are used either in a fresh or dried form, and are most often sold whole, although sometimes they are chopped or flaked beforehand. Herbs can be added at various stages of cooking, or used as a garnish.

Spices, on the other hand, are similar but are made from other parts of the plant. So basically anything that isn’t a leaf (seeds, roots, etc) would be considered a spice instead.

Cooking herbs are typically available in both fresh and dried forms. Fresh herbs are often recommended when cooking, but there are good reasons to use dried herbs too. There are a few things to know about each so you can use the best option for your recipes.

Learn everything you need to know about each of the common cooking herbs on this list, so you can use them like a pro chef. Stock up on dried herbs that you use often, and add fresh herbs to your grocery list for weekly recipes.

Basil is part of the mint family, although it’s much earthier. It does have hints of mint in the taste, along with black pepper and an overall herby aroma. There are varieties that add more of a “spiciness” (that peppery flavor), but in North America, sweet basil is most common. It’s popularly known as being the base for pesto, and an important part of any Caprese salad. It is also used in a lot of Italian dishes, either cooked in or as a garnish.

Bay leaves are a leafy herb from the Laurel tree. These are often added to liquid dishes (soups, stews, sauces) while cooking to infuse them with a slightly pungent, yet almost-minty flavor that balances out any richness. Whole bay leaves should be removed from the dish before serving, not eaten.

Cilantro comes from the leaves of the coriander plant and is part of the parsley family. This controversial herb (some love it, some hate it) has a citrusy, peppery taste that comes off bright and fresh. It’s common in Mexican dishes, as well as lots of other cuisines. Fresh cilantro is best because it’s the most flavorful and potent. It loses its luster when cooked for too long, so it’s best to add it to recipes at the end of the cook time, or as a garnish.

Dill (also called dill leaves or dill weed) comes from the celery family, and looks like a feathery, green stalk. It adds a fresh, lightly sweet, earthy taste–almost like licorice, but not bitter. It’s known for its use in flavoring dill pickles, ranch dressing, and potato salad. It’s best used fresh and uncooked, or as a garnish, rather than cooked into dishes. It complements cooling, refreshing ingredients and is popular in Middle Eastern cuisines.

Marjoram is similar to Oregano (the same family) but marjoram is much milder. Marjoram has a fresh, citrusy flavor profile and it’s a little bit sweet and bitter.

Mint is a popular herb that most of us immediately associate with a fresh and cool mouthfeel (this is from the menthol). It has a lightly sweet flavor that goes well with all kinds of dishes, including sweet, savory, or spicy foods. It infuses foods with a quick burst of sweetness, balances out spicy foods, and works as a garnish to finish off dishes.

The herb Oregano comes from the leaves of the oregano plant, and can be used fresh or dried. It has a pungent, earthy, almost bitter flavor with a hint of minty sweetness. It’s a popular pizza topping, and it’s included in most Italian seasoning mixes. Unlike some herbs, it can be cooked directly into dishes without losing its potency.

Parsley is a leafy little herb that’s most often used as a garnish to finish off a dish, but it can be used to cook with too. It has a bright and slightly bitter taste that balances out other flavors. It also adds just a pop of flavor to anything you like. Chop it up and add it to a range of cuisines, meats, rice or veggie dishes. You can also cook it into soups and use it to make flavorful sauces.

Rosemary is such a vibrant herb with a beautifully aromatic and complex flavor. It’s mildly sweet and flowery, but also has a savory, peppery aspect. It adds the most amazing, rich taste to all kinds of dishes. It can hold up to long cook times to infuse foods with lots of flavor, and it makes a great garnish as well.

Sage has a mix of earthiness, refreshing eucalyptus, and citrusy lemon, finished off with a pepperiness. This bold flavor holds up well in recipes, and works well with heavier meat dishes, sauces, and rich foods. It’s great for savory, aromatic dishes.

Tarragon is a leafy green herb most known for its use in French cooking. It has a licorice, anise-like flavor that is sweet, salty, and bitter, but it also has a freshness to it that balances it out so it’s not overwhelming. It’s best when fresh, as dried forms are much less potent. Strip fresh leaves from the stem and gently chop them up to add to dishes. It turns bitter if cooked too long, so use it as a garnish or add it towards the end of cooking.

Thyme has a sharp herbal flavor with some floral hints, but it is well balanced among other flavors. It’s a tough herb that holds up while cooking and infuses dishes with a beautiful, savory warmth. It can also be added at the end of cooking to finish a dish.

To wrap up, here are the 12 cooking herbs we covered. We definitely recommend stocking up on these for your kitchen, so you’re always ready to cook!

This list of common herbs is really all you need for everyday cooking, although there are always some specialty ones that pop up from time to time. Use this guide anytime you’re unsure about which herbs to use in your recipes, or looking for just the right one to add the flavor your want.