When someone finds out I write about food, they often ask, “What’s your favorite restaurant? Not being a restaurant critic, and thus having to pay for my own meals, I never have a good response. Nobody wants to hear: “I like the affordable place close to my apartment.”

What I’d much rather be asked is, “What’s your favorite brand of tupperware?” Because that question I’m prepared for. The answer is Cambro.

If you haven’t worked in a restaurant, you may not be familiar with Cambro, a brand that manufactures food storage vessels designed for commercial kitchens. The units, which people tend to just call “Cambros,” come in a range of sizes, including two-, eight-, and even 22-quart containers. If you’re looking to store some sort of food—hot or cold, wet or dry, cooked or raw—there’s probably a Cambro that’ll work for you.

Because Cambros are made for commercial kitchen use, they’re not something you’re likely to see for sale at, say, a Williams Sonoma. I learned about them when I was working (ie, washing dishes, bussing, and taking orders) at Donburi, a Japanese restaurant in Washington D.C.. Whenever one would end up at the dishwashing station I’d find myself struck by how different they were from the flimsy, plastic containers I had at home. But because they don’t seem to be marketed toward home cooks, it’s not immediately apparent that they’re not just a great product, but a superior one—better in pretty much every way, in my opinion, than a standard plastic container.

Cambros are utilitarian, inexpensive, durable, space-efficient, and easy to use; food storage containers made for professionals. Our old plastic containers were perpetually and mysteriously greasy (no amount of soap seemed capable of properly washing them), and easily chipped, stained, and took on odors. The Cambros we use in our home are predominantly made from polycarbonate, a type of clear, strong plastic that’s also used to make impact-and-shatter resistant windows and glasses lenses. And while there are concerns about the long-term safety of BPA, a chemical used to make polycarbonate, the FDA has not banned their use, and polycarbonate containers are stain-and-odor resistant and capable of storing foods in a temperature range of -40 to 210 degrees Fahrenheit (although heat has been shown to increase the degree to which BPA leeches into food). It’s also worth noting that Cambros made from materials other than polycarbonate are BPA-free.

Getting back to the benefits of Cambros: while our old plastic containers had flimsy lids with difficult-to-clean crevices, Cambro’s “Camwear Seal” lids fit tightly. When I accidentally knocked a full, sealed container off of the counter once, it mercifully didn’t pop open (test at your own peril). A consequence of that tight seal is that the lids do require a bit of effort to get them off. If that’s an issue for you, get a regular “Camsquare” lid, or a translucent seal cover.

Note: Lids aren’t usually bundled with Cambros and the containers themselves are sold individually. While this means you need to put in a bit more effort than you would if you were buying a set of containers at a store, it also means you won’t end up with shapes and sizes you don’t want or need. Just be sure that the lids you order are the correct size for their corresponding containers! 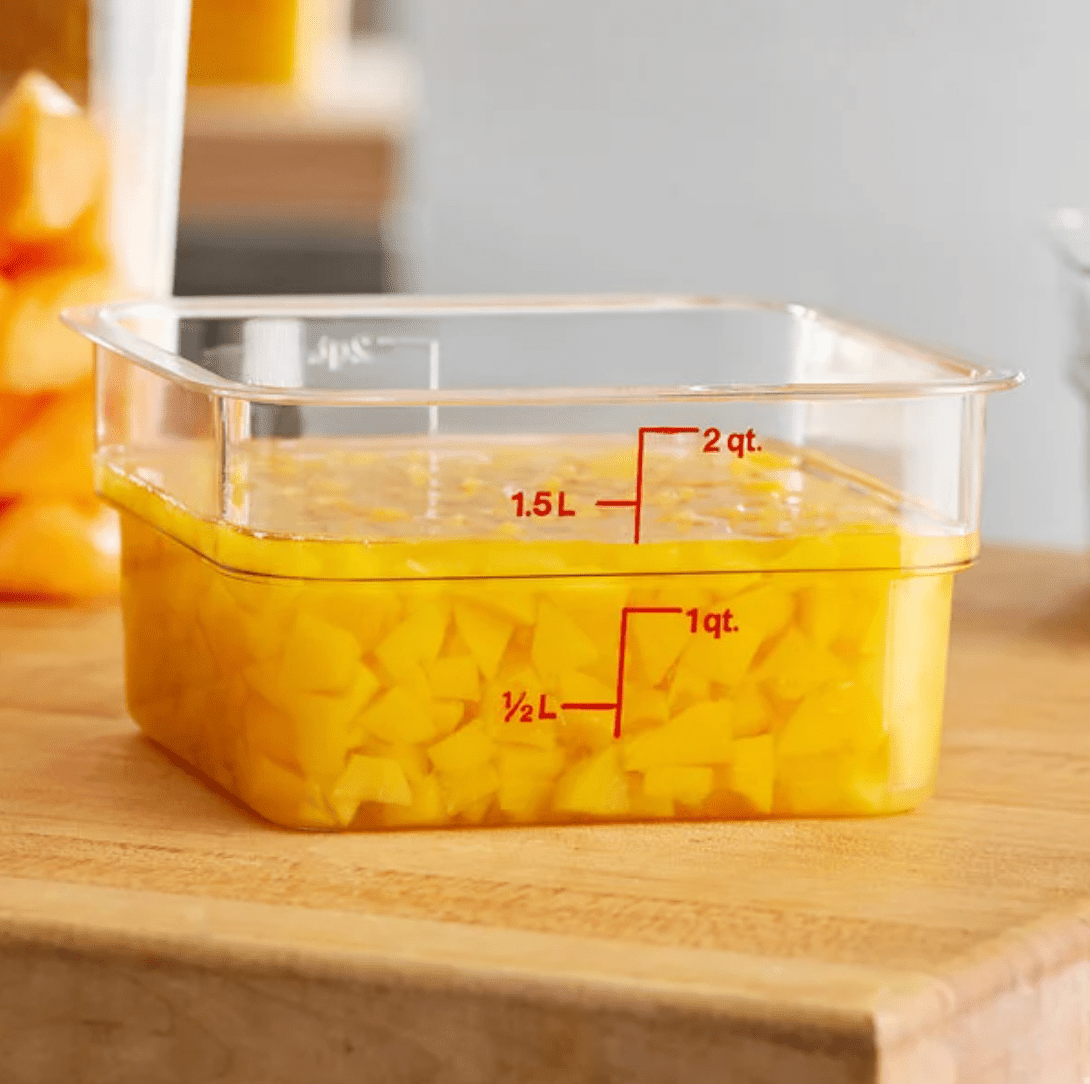 This model is ideal for both the fridge and the pantry. Two quarts is ample storage space for leftovers, and dry and prepped ingredients, and the short, square shape means that they stack well and are relatively easy to fit inside of a crowded fridge. The “Winter Rose”-colored gradations are easy to read, and the containers nest inside of each other when empty, which is not the case with every Cambro model.

My wife and I use these exclusively with the “Camwear Seal” lids, in part because I often keep stews, leftover beans, and other liquid-heavy foods in them, and I want to be very sure they have a tight seal. On the shelf I use them to store things like bulk-purchased panko, nuts, brown sugar, and chocolate chips. 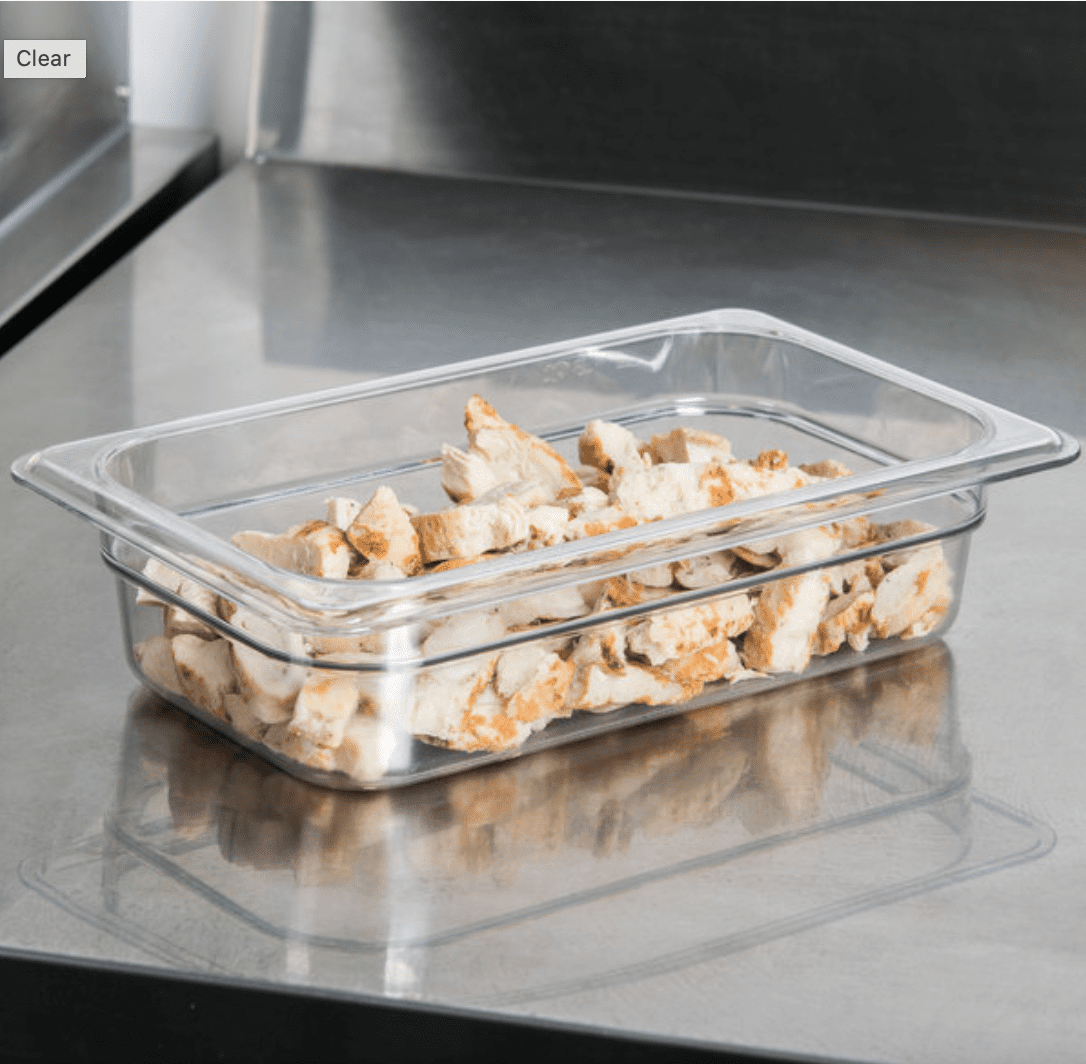 This particular model, which is long and shallow, is perfect for in-fridge storage. We like these for any type of sliced protein or vegetable, and we’ve used them to store both prepped and cooked food. In particular I love these for quick-pickling sliced vegetables, or for keeping roasted red peppers submerged in olive oil. They’d also be a great fit for brining chicken breasts. Because they’re so narrow it’s easy to cram and stack them in the fridge. Unlike the two-quart square Cambros, these are not designed to stack inside of each other when empty, but their slim profile means that, despite that, they’re not hard to store. 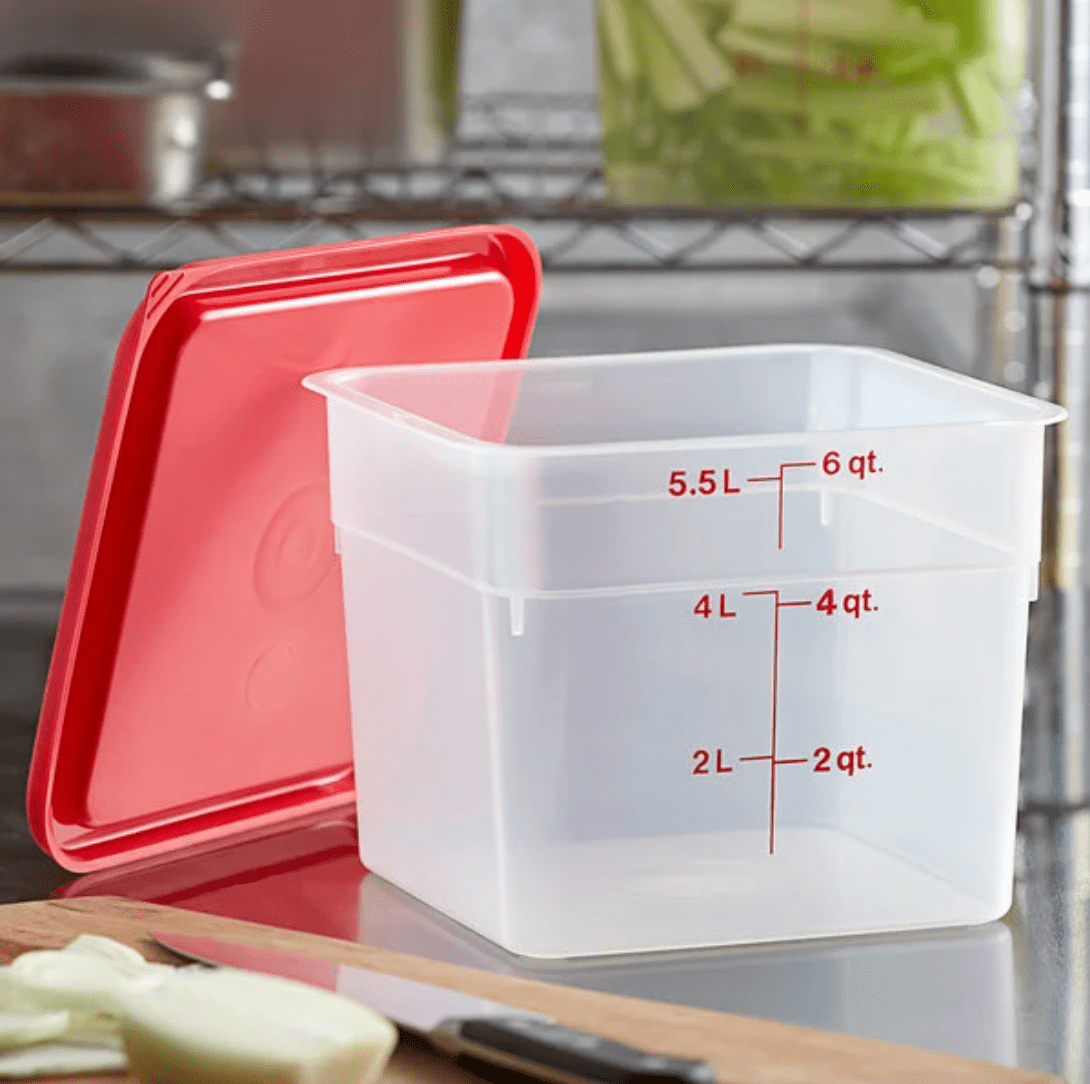 This 6-quart model is great for dry goods, and we use them to store rice, dried beans, various flours (although Sho Spaeth, Senior Editor, prefers a smaller, 4-quart size for storing flour), and other bulk pantry items we want to keep fresh and insect-free. This particular model is sold in a two-pack, with lids, which is extremely convenient. Because these are made from polypropylene they’re a bit less durable than the polycarbonate models, but since all we use them for is dry storage we’ve never found that to be a problem. They’re also BPA-free, and the included lids seal tightly, yet are easy to remove.